About Me:
Hey there! I am Uriah Hon. They call me “Cheers” on the trail. I am a born-and-bred East Coaster currently residing in Maine near Acadia National Park. Over the last 10 years I have found myself as an aspiring long distance hiker, nature enthusiast, minimalist and adventurer.
Through my journey, I have been lucky enough to set up my tent in 48 states, generally in the off season as I hope to experience the land for what it was before us, undeveloped and untouched. Hiking and backpacking has not only been a journey, but my savior, giving me opportunities only my wildest dreams could have ever thought up. Along the way, I have been gifted with the opportunity to share my journeys in hopes to inspire you or someone you know to join our ever-growing hiker family.
That being said, I come with a purpose: The Northville-Placid Trail. This is how the “easy” hike became one of the hardest and most humbling experiences of my hiking career.
To split up the daunting office hours I tend to read a ton of hiking forums and blogs. I am constantly seeking out my next hike so that, when the chance arrives, I have a heading. A few commonalities are evident in my process: I love to go places I have never been; even more so to places others don’t often go. The more secluded it is the more enticing. I am a constant reader of TheTrek.com, where one day I was reading through some of its blog posts as the thru-hike season was about to kick off.
“The Northville-Placid Trail; A 133 Mile Hidden Gem in the Adirondacks” the first title read. “Hey, I like gems!” I wasn’t even half-way through the article when I found myself salivating at the thought of this “quiet backcountry, moderate, lakes and rivers trail” that they spoke of. After thousands of miles, coming home beat and battered from numerous summits, rocky, rooty Maine terrain long distance hikes, I thought to myself; “An easy backcountry hike would be a nice change.”
Sold at the thought, I started my research. The more I read the more I fell in love. Seeing terms like “desolate,” “map and compass,” “isolated” and “solitude” really got me on my feet and moving forward to making this hike happen. Set on the idea, I took the days off from work. Now it was official, I was hiking the Northville-Placid Trail (NPT).
As I prepared I duly noted warnings about the wet conditions, lack of civilization, and primitive nature of the trail and the power of the Adirondacks. Even so, pictures of the blooming fields, thick forest, and picturesque flowages pushed all reservations to the back burner. It struck me as odd, though, that I couldn’t find a single post about hiking the NPT in between November and May. Again, duly noting that even May was not preferred due to black fly outbreaks in the marshy terrain. Something that would turn most people away, was exactly what was drawing me in. Let’s just say that I tend to go against the grain when it comes to this kind of thing, letting my ego drive me to be able to say “I did this because nobody else would.” I remember commenting on this jokingly to a friend that agreed to go with me: “Apparently nobody hikes this thru during the late fall, winter or spring.” We chalked it up to the opinion that most people prefer pleasure to perseverance. Our start date would be April 9th.
As you can assume, I read and read and read, non-stop for 4 months, during which my confidence only grew. It was then that I started making arrangements for shuttles and resupplies. That is when I met Jack. He would be a great source of information, as well as my ride to the southern end of the trail when I arrived in New York. Jack made sure to express his concerns which I, admittedly, noted but ignored. Oh how I wish I listened. He would inadvertently give me the best passive suggestion I would receive while planning my hike. “You are bringing snow shoes right?” I responded with. “We won’t be Jack, but thanks for your concern. Fortunately here in Maine we are no stranger to the snow.” It’s only in hindsight that I would I learn to spite my ego on this one. See, here in Maine, we tend to think we get the extremes of everything weather and terrain related. Outside of our backcountry, the rest of the world is a cakewalk. Or should I say, USED TO figure it.

The Tables Turned
It’s two weeks before my departure date and the news all has one story in common. New York just got between 2’ and 4’ of snow. The issue here was that I had already committed. Worse, I had told everyone I was going and had my resupplies waiting to be mailed. Jack emailed: “Hey good morning Uriah, I just wanted to let you know that we just received a massive storm and there is 2+ feet of snow up around the 2500’ mark and more in some of the valleys. Also, the water levels are high.” I replied; “Thanks Jack, I’ll see you on the 9th.” To be up front, I brushed it off like the rest of the warnings because…. Well, I am from MAINE! We are practically fully functioning snowmen. Once again my ego got to me. 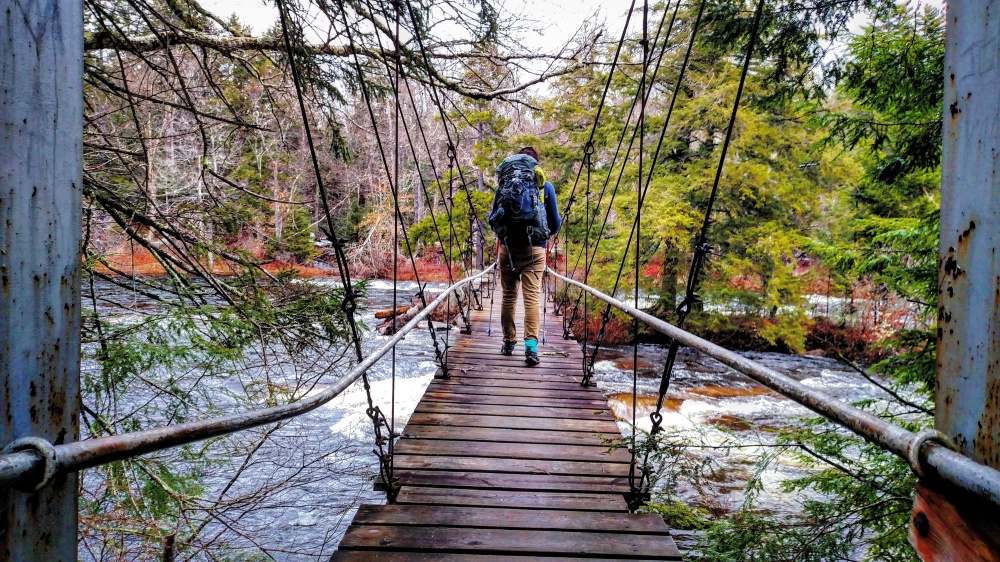 The things I know now are; I should have known better. All the warnings were clearly laid out. My wanderlust is stronger than my decision making skills.
None of which benefited me.

Part Two: Coming next week….
About The Northville-Placid Trail
133 Mile backcountry trail
-Spans from Northville, New York to Lake Placid, New York
-Traverses the ridges and valleys of the Adirondack Mountains
-Circles many lakes, ponds, streams, and flowages
-Primitive, poorly marked, and poorly maintained (although it’s not promoted any differently)
-Map and compass are necessary
-Days away from civilization in most spots
IMPORTANT THINGS TO KNOW
-The trail passes through Hamlets. Which were described to us as a self-governing plot of land smaller than a village. Hamlets literally have NOTHING. Most not even having a store or hotel.
-Preferred hiking time is in between June and October
-It is very lightly traveled (we actually never saw another person)
-The locals were incredibly helpful and supportive
-Do your research before taking on this challenge